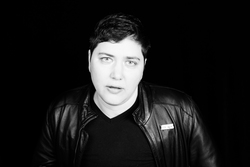 All City: A Novel is a near-future speculative fiction that addresses climate change and gentrification told from the perspective of those most affected by these scourges. An indictment against the commodification of poverty and the looming threat of climate change, All City tells the story a convenience store worker and a genderqueer anarchist who, together, squat in an abandoned luxury building after a superstorm decimates New York City and the wealthy class flees.

Alex DiFrancesco has published fiction in The Carolina Quarterly, The New Ohio Review, and Monkeybicycle. They are a winner of Sundress Academy for the Arts' 2017 OutSpoken contest for LGBTQ+ writing. DiFrancesco's non-fiction has appeared in The Washington Post, Tin House, Longreads, Brevity, and was a finalist in Cosmonauts Avenue's inaugural non-fiction prize. Their storytelling has been featured at The Fringe Festival, Life of the Law, The Queens Book Festival, and The Heart podcast. DiFrancesco is also a skilled bread baker and pastry cook, a passionate activist and advocate, and has a small, wonderful cat named Sylvia Rivera-Katz.