September22 at in Brooklyn, NY 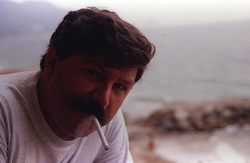 Join us for two events with Paco Ignacio Taibo II at the Brooklyn Book Festival.

Born in Gijón, Spain, Paco Ignacio Taibo II has lived in Mexico City since 1958, when his family fled Spanish fascism. A distinguished historian and essayist, Taibo is also renowned worldwide for his detective novels. His numerous literary honors include two Dashiell Hammett prizes, a Planeta prize for best historical novel, and the Bancarella Prize for his biography of Che Guevara. Taibo lives in Mexico.

11:00am The Streets Are Burning: Crackdowns and Breakdowns

How quickly the world we know can crumble. In Karina Sainz Borgo's It Would be Night in Caracas, one woman fights to survive as tear gas fills the streets of Venezuela's capital. In the slums of Rio de Janeiro, the boys of Geovani Martins' debut story collection, The Sun on My Head, live in the shadow of police, poverty, and violence. And in '68, Paco Ignacio Taibo II gives a harrowing firsthand account of the night two hundred students were shot dead in Mexico City’s Tlatelolco Square. Moderated by Eric M.B. Becker, Words Without Borders.

History bears out that resistance is often the pathway to combat injustice - be it peaceful protests, strikes or revolutions. Black Lives Matter organizer and host of Pod Save the People, DeRay Mckesson, The Other Side of Freedom, Paco Ignacio Taibo II, ‘68: The Mexican Autumn of the Tlaeteloco Massacre, and journalist Nick Estes, Our History Is the Future: Standing Rock Versus the Dakota Access Pipeline, and the Long Tradition of Indigenous Resistance, discuss historical events that have motivated people to resist and movements that evolved from them.