From Heart of Darkness to Hemingway to Infinite Jest 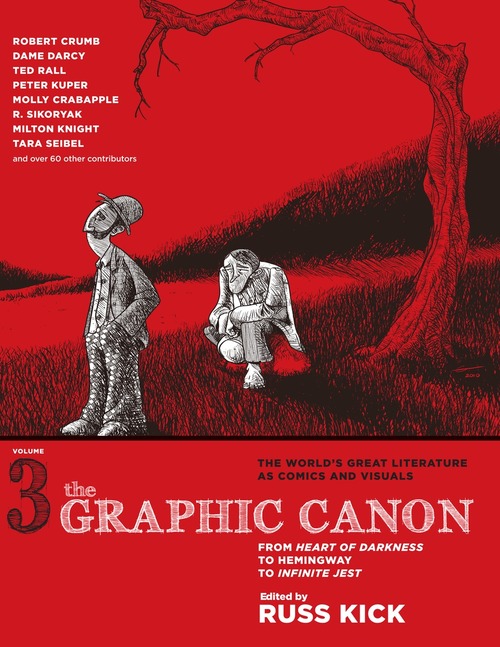 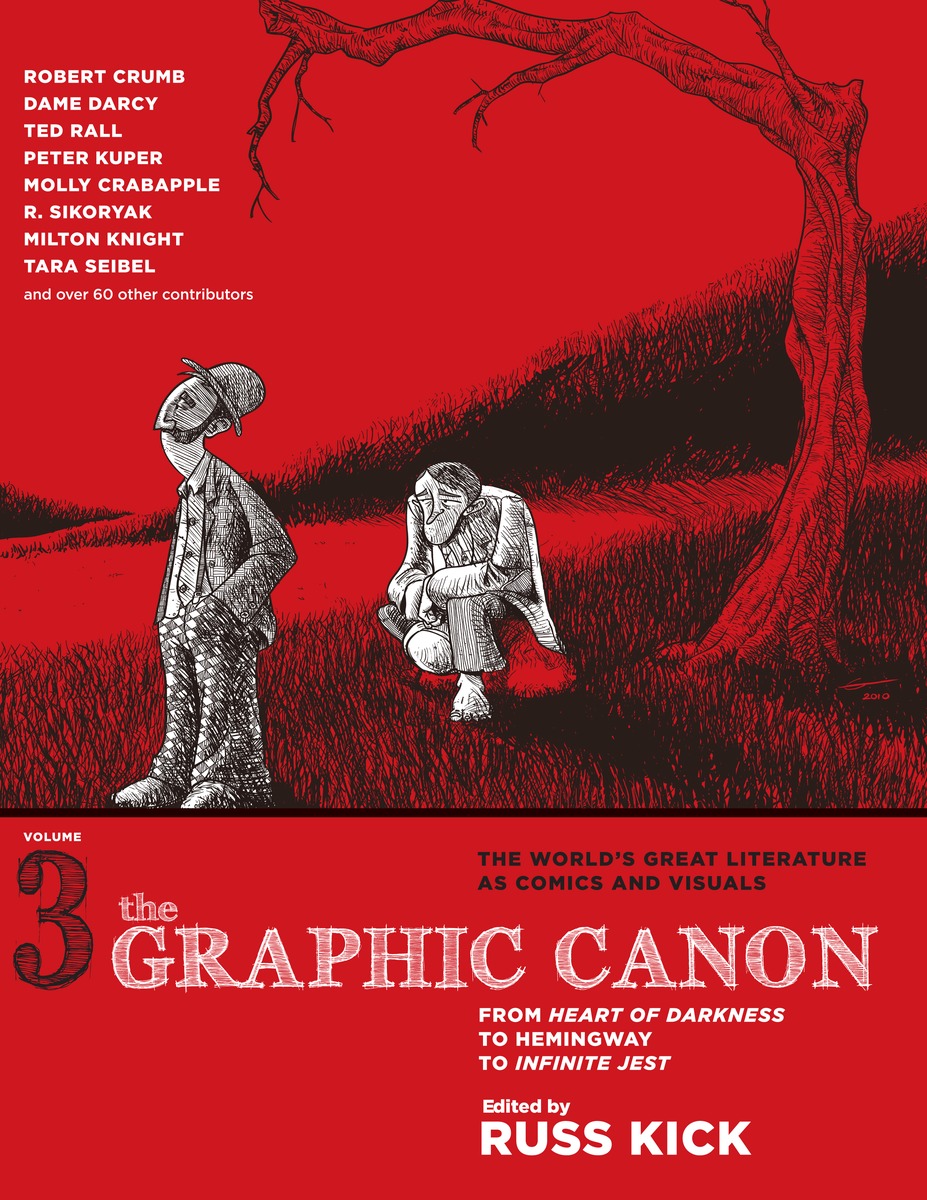 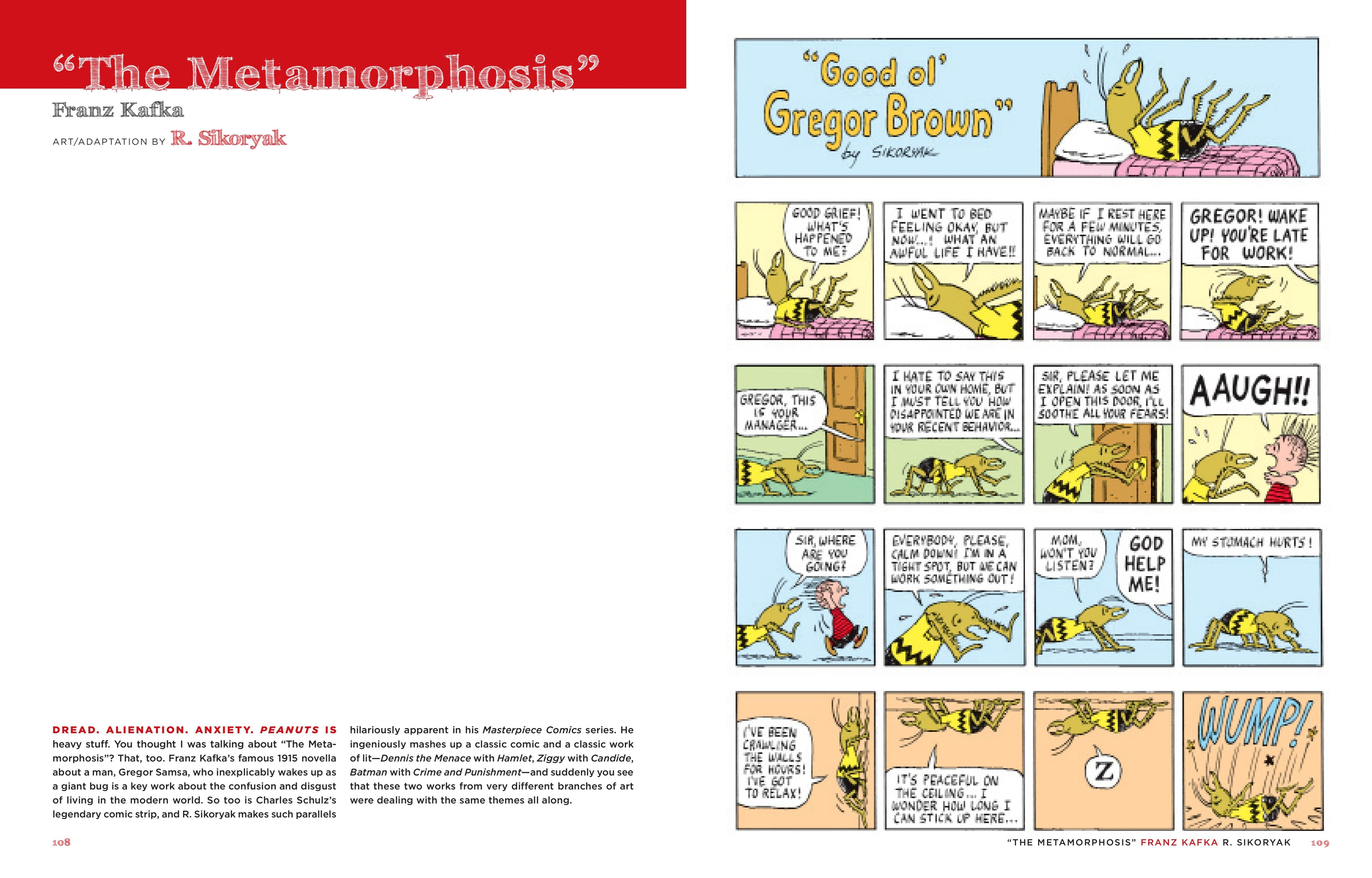 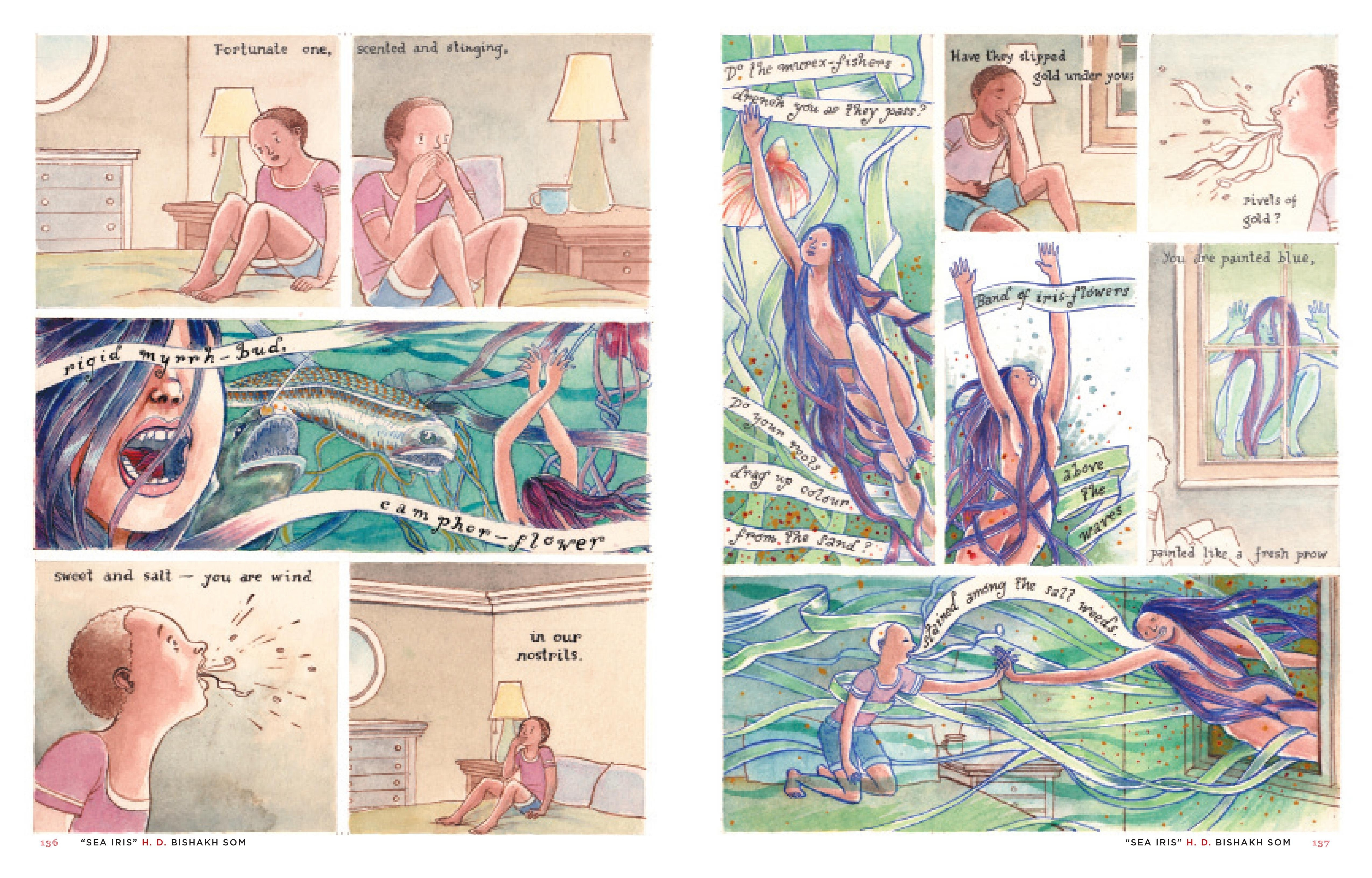 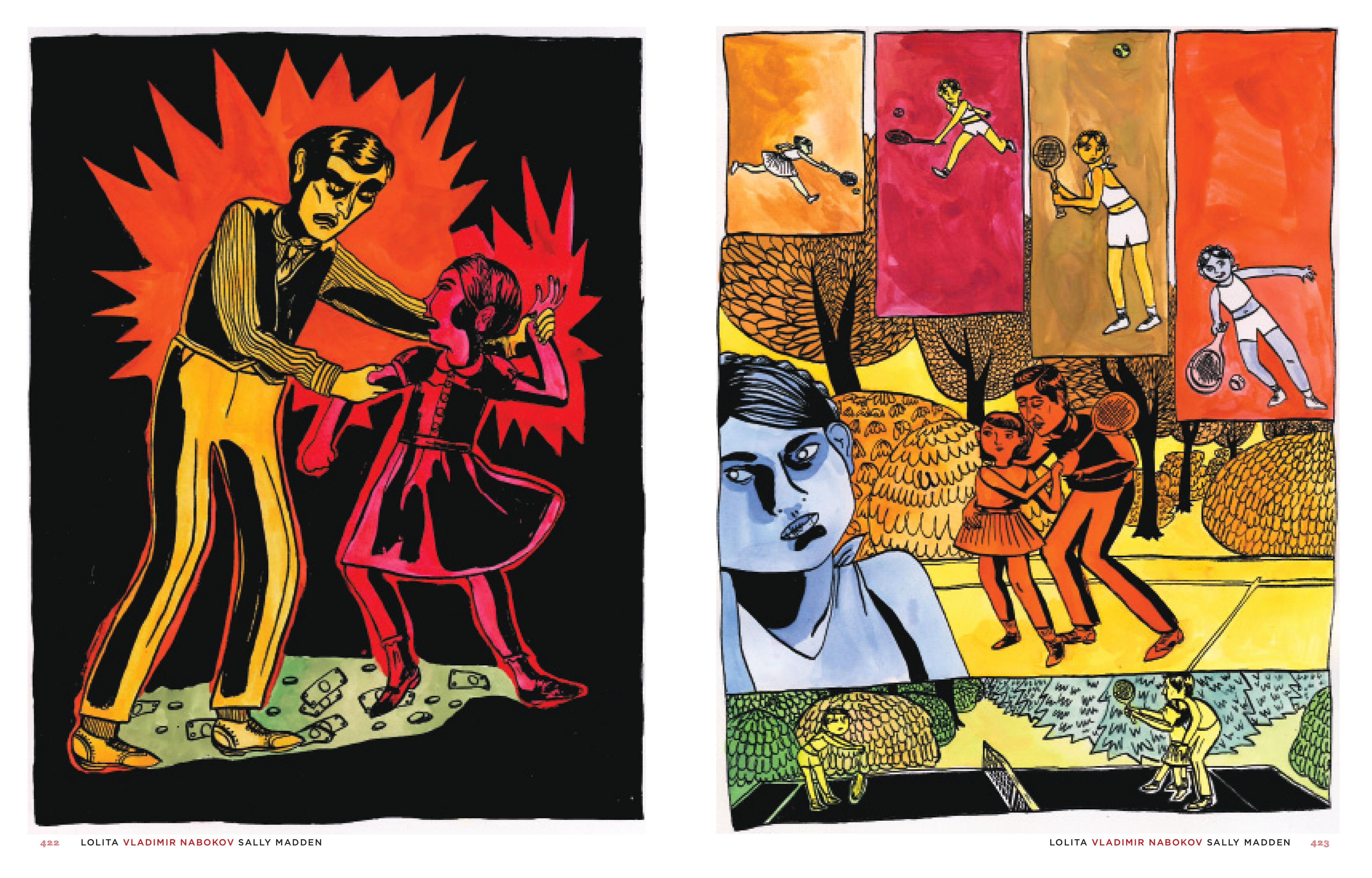 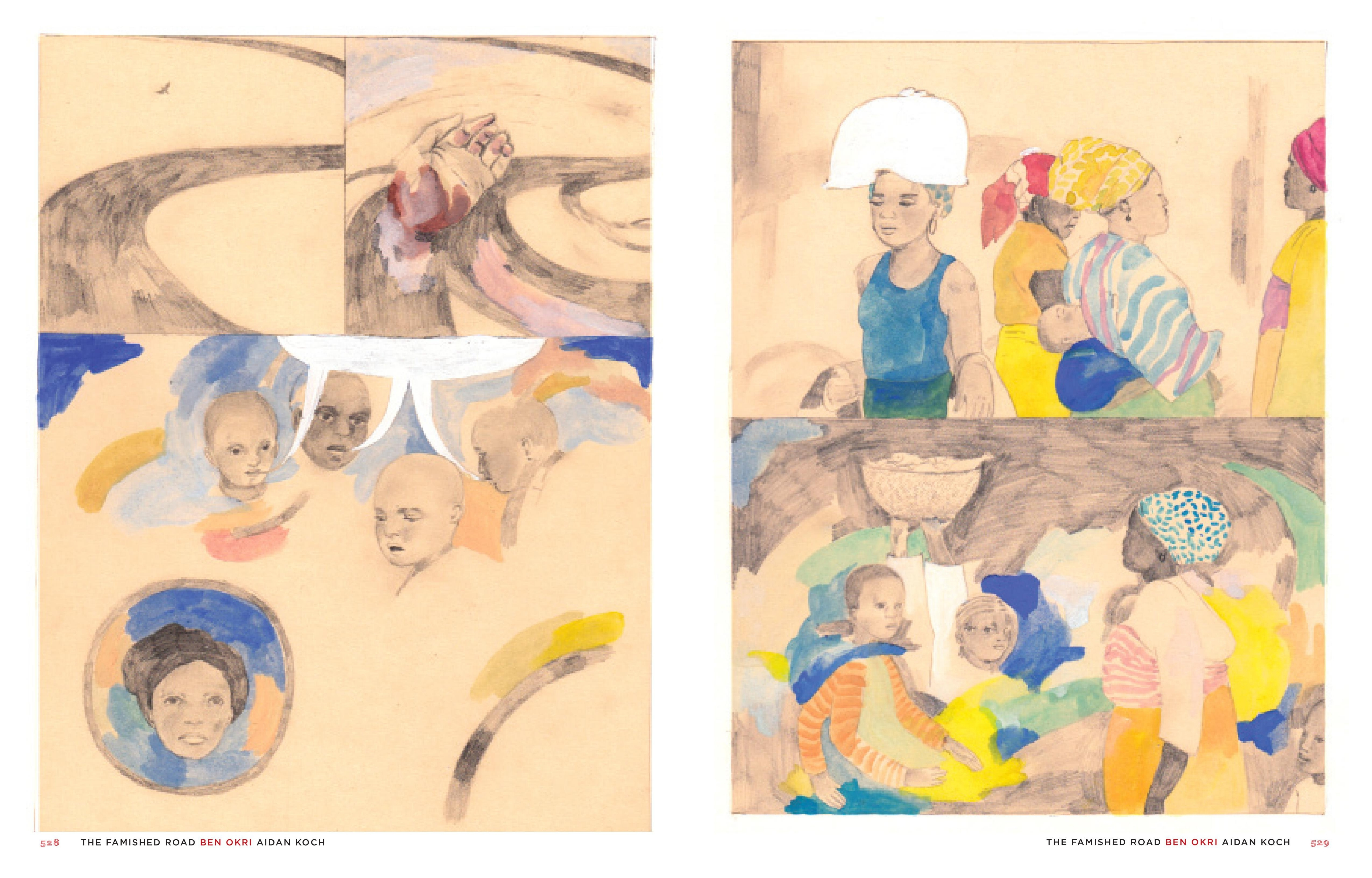 The classic literary canon of Western civilization meets the comics artists, illustrators, and other artists who have remade reading in the last years of the twentieth century and the first decade of the twenty-first century in Russ Kick's magisterial, three-volume, full-color The Graphic Canon, volumes 1, 2, and 3.

The Graphic Canon, Volume 3 is a non-stop barrage of comics, full-page illustrations, photography, and cutting-edge design bringing to life the literature of the twentieth century. You never know what you'll find: a Sherlock Holmes mystery, an H. G. Wells story, an illustrated guide to the Beat writers, a one-act play from Zora Neale Hurston (drawn by Milton Knight), a disturbing meditation on Naked Lunch, Rilke's soul-stirring Letters to a Young Poet, a WWI soldier's suppressed poem of war's savagery, Anaïs Nin's diaries, the visions of Black Elk, the heroin classic The Man With the Golden Arm (published four years before William Burroughs's Junky), and the postmodernism of Thomas Pynchon, David Foster Wallace, Kathy Acker, Raymond Carver, and Donald Barthelme.

The towering works of modernism are here: T. S. Eliot's "The Love Song of J. Alfred Prufrock" and "The Waste Land," Yeats' "The Second Coming" done as a magazine spread, Heart of Darkness, stories from Kafka, The Voyage Out by Virginia Woolf, James Joyce's masterpiece, Ulysses, and his short story "Araby" from Dubliners, rare early work from Faulkner and Hemingway (done by artists who have drawn for Marvel), and poems by Gertrude Stein and Edna St. Vincent Millay.

You'll also find original comic versions of short stories by W. Somerset Maugham, Flannery O'Connor, and Saki (manga style), plus graphic adaptations of Lolita (and everyone said it couldn’t be done!), The Age of Innocence, Siddhartha and Steppenwolf by Hermann Hesse, The Negro Speaks of Rivers by Langston Hughes, One Flew Over the Cuckoo's Nest, Last Exit to Brooklyn, J. G. Ballard's Crash, and photo-dioramas for Animal Farm and The Wonderful Wizard of Oz. Feast your eyes on new full-page illustrations for 1984, Brave New World, The Doors of Perception, Waiting for Godot, One Hundred Years of Solitude, The Bell Jar, On the Road, Lord of the Flies, The Wind-Up Bird Chronicle, and three Borges stories.

Meanwhile, Robert Crumb's rarely seen adaptation of Nausea captures Sartre's existential dread. Dame Darcy illustrates Cormac McCarthy's masterpiece, Blood Meridian, universally considered one of the most brutal novels ever written and long regarded as unfilmable by Hollywood. Tara Seibel, the only female artist involved with the Harvey Pekar Project, turns in an exquisite series of illustrations for The Great Gatsby. And then there's the moment we’ve been waiting for: the first graphic adaptation from Kurt Vonnegut's masterwork, Slaughterhouse-Five.

“The Graphic Canon is startlingly brilliant.”

“This meaty slab is laced with more wit, beauty, social commentary and shock than one might expect.”

“This is not only a survey of the world’s diverse artistic past, but also a breathtaking glimpse of this young medium’s incredible future.”

“An exciting new benchmark for comics!”

“Bold, brilliant ... By turns playful and beautiful, this visual treatment is more than entertainment; it offers a new perspective for understanding these enduring works.”

While writing articles and a column for The Village Voice, Kick was the founder and editor, independently, of The Memory Hole, Memory Hole 2 and Altgov2 which made US government documents available to the public through FOIA requests and other means. In 2003 he exposed an unredacted internal report on Justice Department hiring practices. In early 2004 he brought to light government-censored photographs of the coffins of the military war dead from the Iraq War. In both cases, his reports on his own site became the subject of front-page reporting in the nation’s leading national newspapers.

Kick produced two explosive series of books that were published by the Disinformation Company throughout the first decade of the 21st century. The 50 Things You’re Not Supposed to Know and You Are Being Lied To series of books became underground bestsellers, with titles like Everything You Know Is Wrong, Everything You Know About Sex Is Wrong, etc., educating the Generation X kids who became adults in that decade about government lies and the history that wasn’t taught in schools.

At the end of that decade, Kick did an about-face, and began a new career as an anthologist bringing together comics art with our civilization’s legacy of classic literature, inviting hundreds of illustrators and artists to reimagine classic stories, poems and plays in new ways in a series of books known collectively as The Graphic Canon. The Graphic Canons were celebrated as a new kind of illustrated book, with Volume 3 hitting the New York Times Bestseller List for Graphic Books, and rights sold for foreign editions to publishers around the world.

Towards the end of the 2nd decade of the 21st century, Kick returned with renewed intensity to his political activism. From 2018 to 2021, he served as one of the directors of Rise for Animals, where he expanded their Animal Research Laboratory Overview with documents concerning animal experimentation obtained through FOIA and public records requests.

From Molly Crabapple, comics artist and colleague of Russ Kick —

I first found Russ Kick when I was thirteen, through his book Outposts.  For a friendless goth kid like me, Kick was the exact sort of guide I needed. Like a punk-rock Virgil, Russ's work led countless young people like me to the exact sort of places that America tried to hide—to the dangerous, thrilling, strange, ludicrous and beautiful realms where we imagined we could belong. I was an immediate devotee; his formative bad influence helped shape my own artistic path. With his Disinformation series, Russ challenged power. He peeled the censored bars off of redacted documents, and kicked down the doors of the pompous and mendacious, to reveal their skulduggery to the world. His work was transgressive, subversive, and irreverent of piety—all qualities in short supply today. Russ Kick showed the possibilities of life. Many years later, I was lucky enough to have Russ as an editor on The Graphic Canon. Never meet your idols, they say, particularly the ones of the gonzo variety, but in Russ's case, this would have been bad advice. He was unfailingly kind, supportive, generous and perceptive. I cannot fathom the loss of such a man, but the world is made more narrow by his absence.