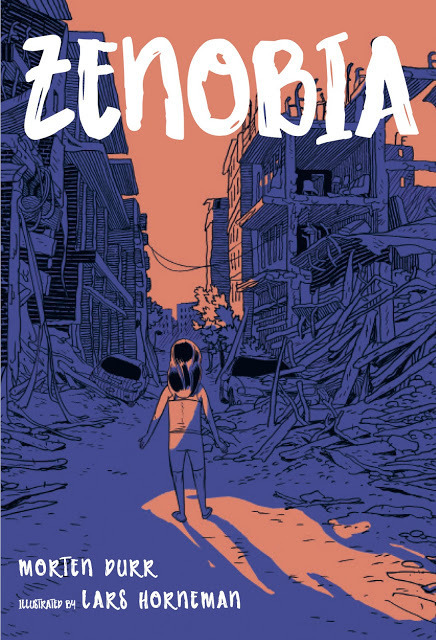 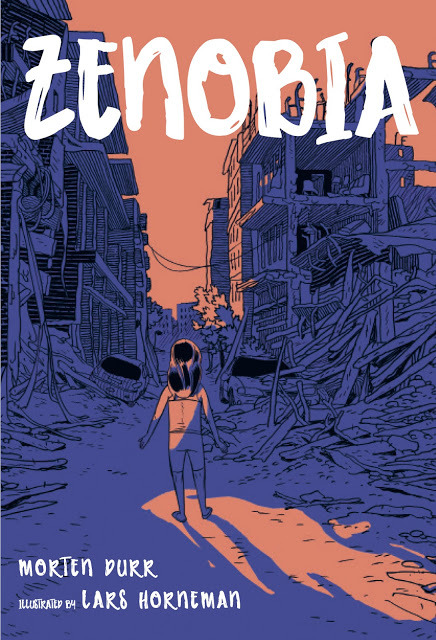 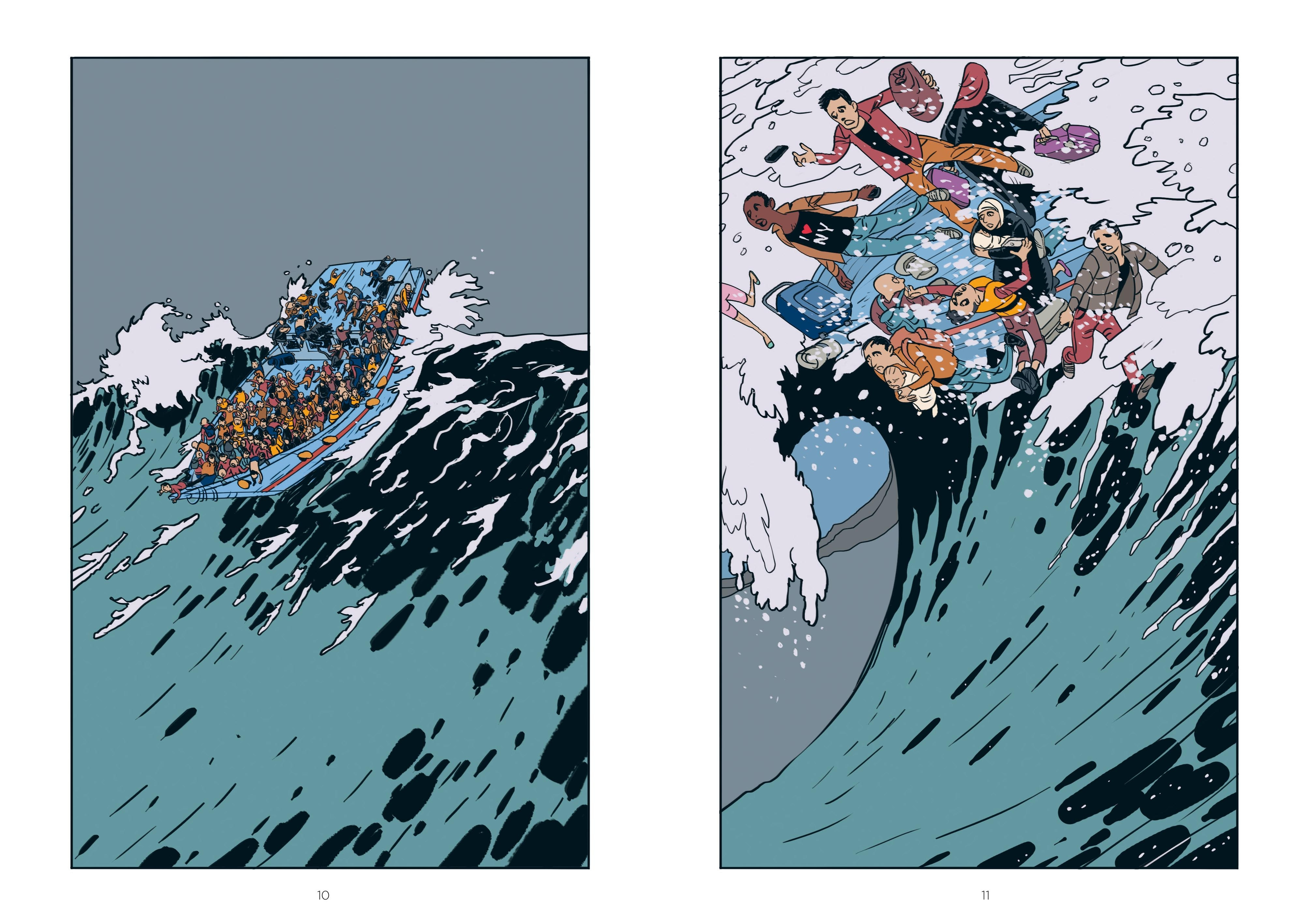 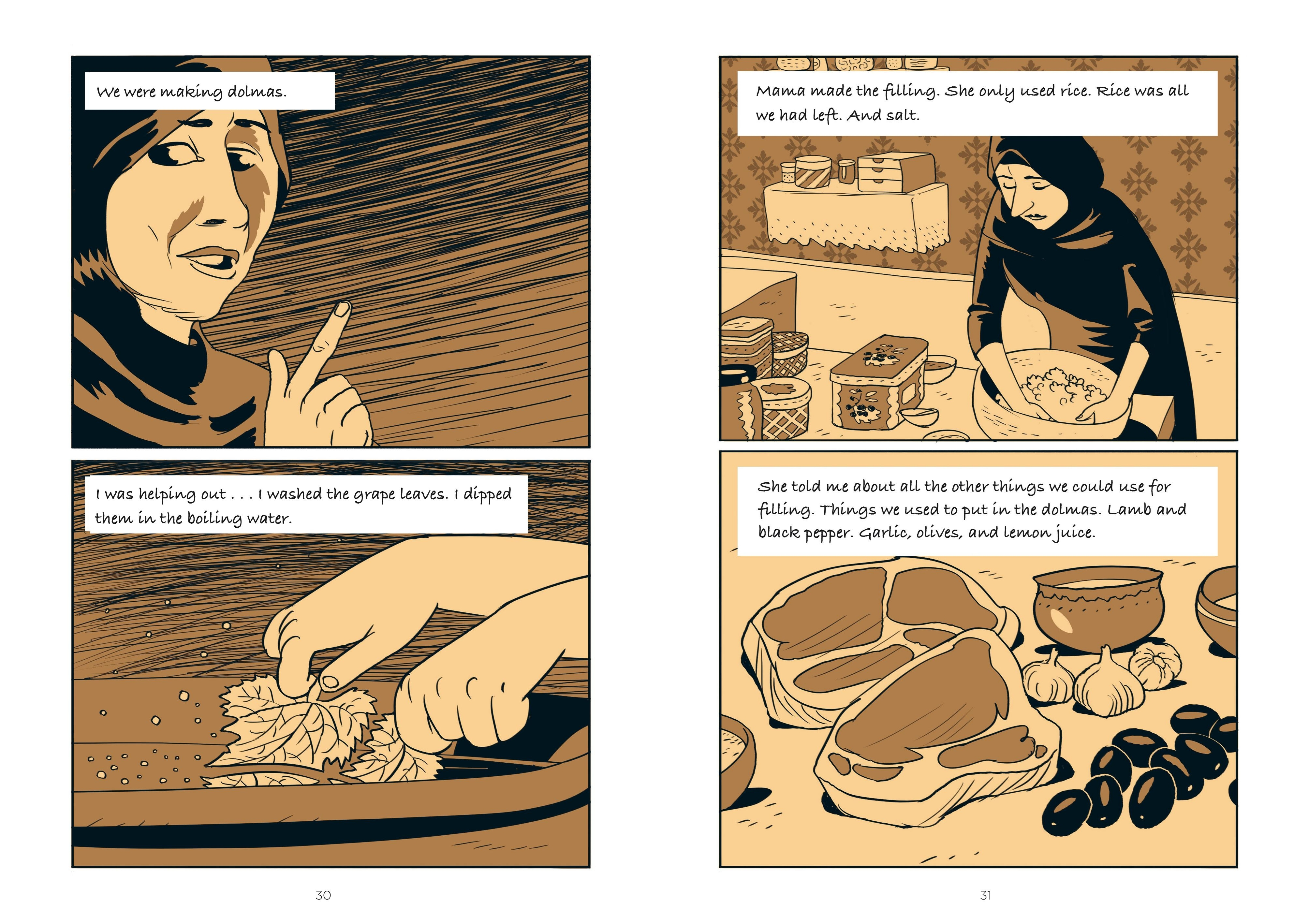 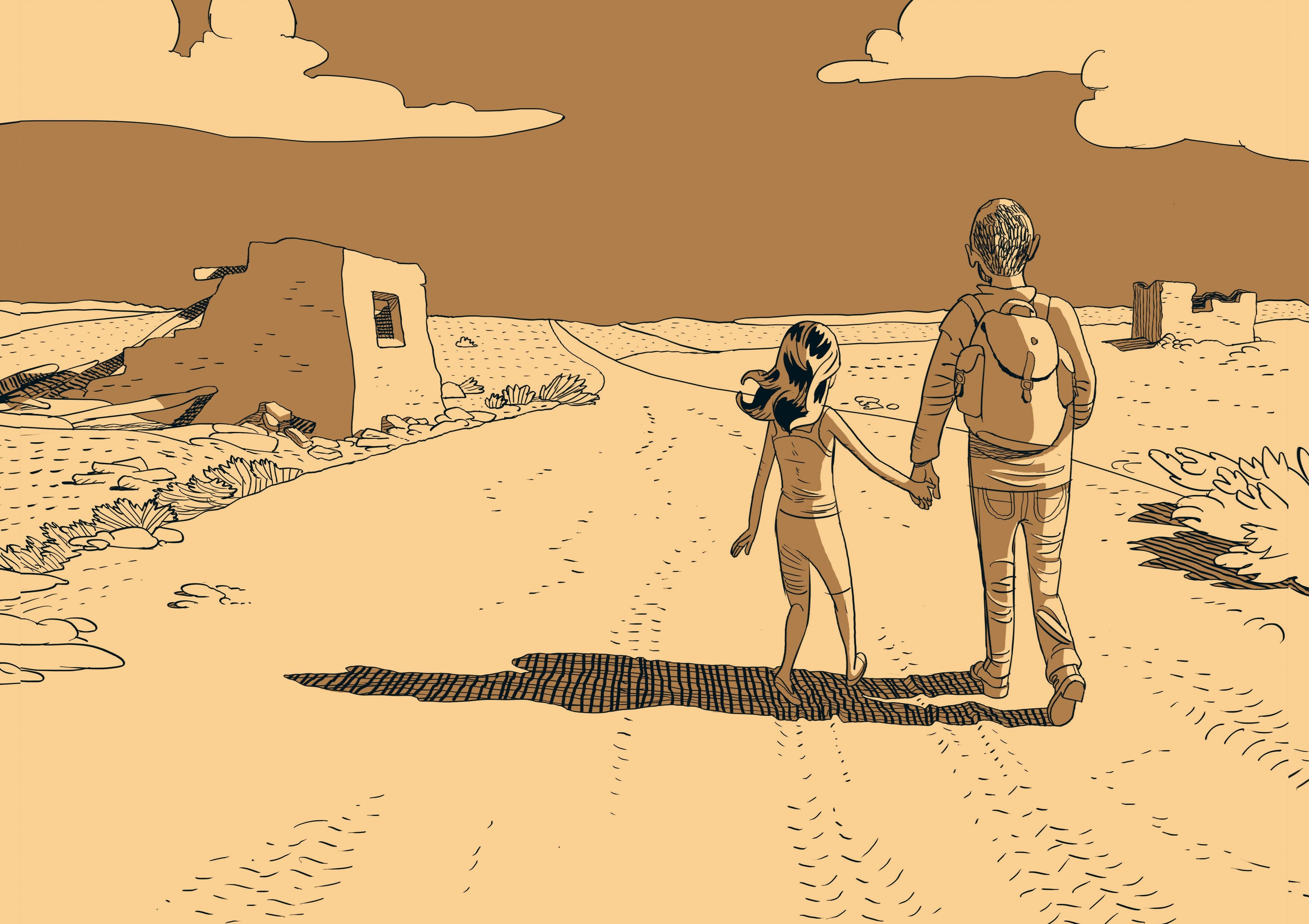 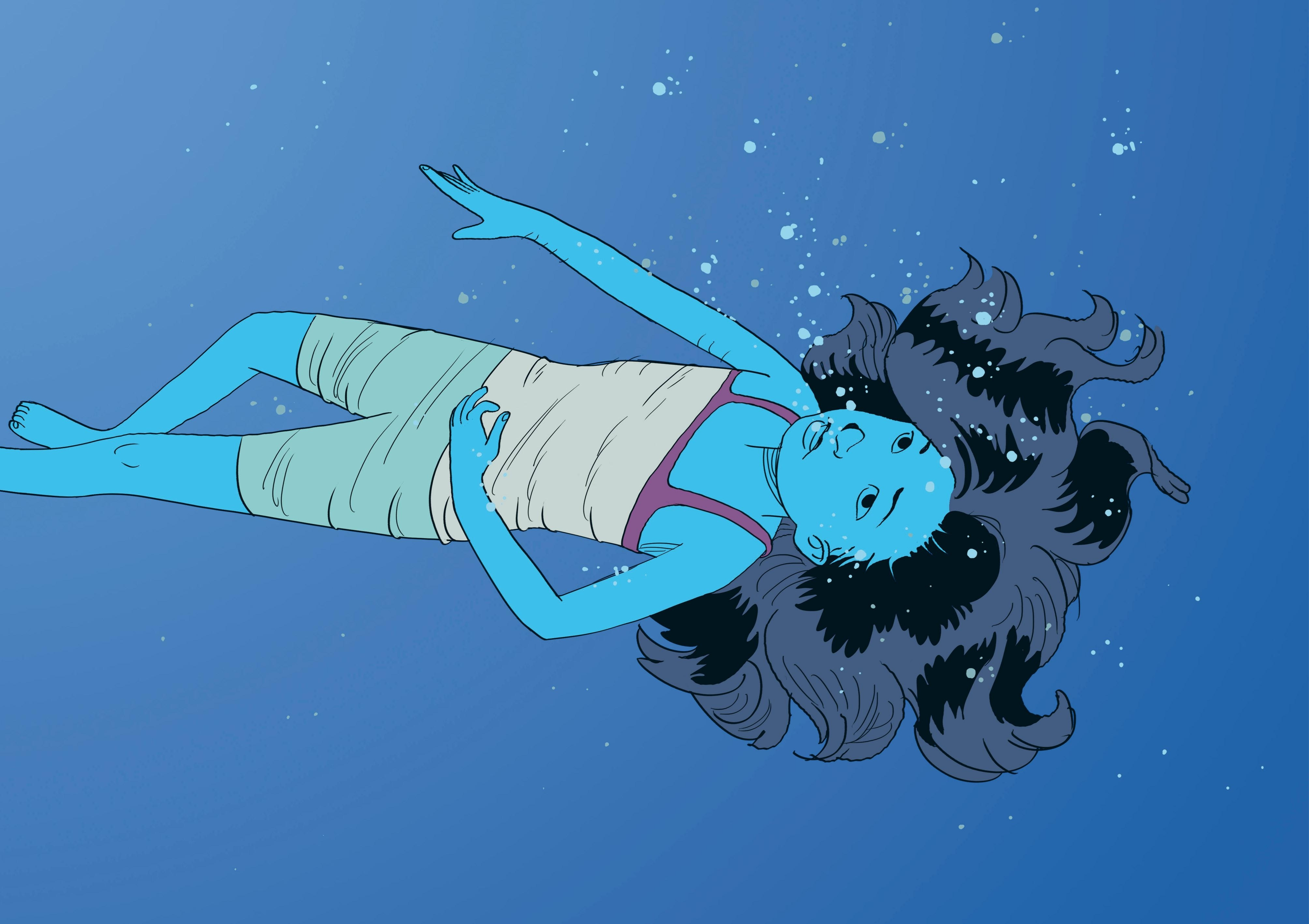 Zenobia was once a great warrior queen of Syria whose reign reached from Egypt to Turkey. She was courageous. No one gave her orders. Once she even went to war against the emperor of Rome.

When things feel overwhelming for Amina, her mother reminds her to think of Zenobia and be strong. Amina is a Syrian girl caught up in a war that reaches her village. To escape the war she boards a small boat crammed with other refugees. The boat is rickety and the turbulent seas send Amina overboard. In the dark water Amina remembers playing hide and seek with her mother and making dolmas (stuffed grape leaves) and the journey she had to undertake with her uncle to escape. And she thinks of the brave warrior Zenobia.

Zenobia is a heartbreaking and all-too-real story of one child's experience of war. Told with great sensitivity in few words and almost exclusively with pictures, Zenobia is a story for children and adults.

“Zenobia is not so much a novel as a fable, a vignette in a lost life. ... [It] highlights, with simple clarity, Syria’s noble historical legacy as well as the plight of its modern people. Amina’s short and tragic story...is harrowing and instructive.”

“Deceptively spare, this timely and important offering is a must-read, helping bring greater understanding and empathy to a situation that for many feels far away. Graphic storytelling at its most powerful.”

“Haunting and powerful. With very few words, Morten Dürr and Lars Horneman show all the devastation and despair of the Syrian refugee crisis.”

“This beautifully-wrought and completely devastating Danish graphic novel will probably make you angry. Or at least it should make you angry. Most possibly it’s about something that doesn’t affect you directly other than having to endure the anti-immigrant, anti-Muslim rhetoric that has become more accepted in our own country, though has never been completely taboo. It’s a brief book that packs a wallop of emotion of its own, especially anger. More than anything, Zenobia is the story of what happens when groups of people lose compassion for strangers. It’s the story of how things play out when difference is made the primary arbiter of how you qualify the worth of people. It’s a story that so many of us are in some manner, directly or indirectly, complicit.”

“Zenobia is a remarkable book that sends a strong message about one of the world’s most persistent crises. Its power lies in its visual simplicity and a very few poignant words but, above all, it is impossible not to identify with Amina and her parents and uncle. Their story becomes your own; their family, your own family. In short, if any book can be perfect, this is it.”

“The combined restraint of both the pictures and words powerfully amplifies the astonishing tragedy of the girl’s fate, creating an unforgettable story that will stay with teens and adults alike.” 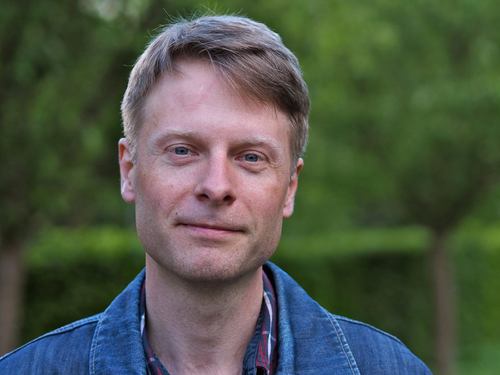 MORTEN DÜRR is the award-winning author of 54 books in Danish, which have been translated into nine languages, as well as the graphic novel Zenobia. He lives in Copenhagen with his two daughters.