A debut picture book for adults about a bear that elicits immediate, deep emotional recognition.

Bear, Staffan Gnosspelius’s debut book, is a gorgeous visual meditation on depression. In this deeply affecting, wordless picture book for adults, a bear is maddeningly afflicted with a cone that covers his head and that he is unable to take off. He furiously stomps and yells and tears at the cone, he implores the skies and fate for relief, he is drawn to dark and wild and scary places. The depths of his sadness feel like a defeat. It’s a battle he wages until he’s mentally and physically exhausted.

Then, one day, Bear hears notes of music, the humming of a friendly hare. The hare hovers nearby, concerned, sometimes driven away by Bear’s frustration and anger, more often staying close and gently offering support. The author began drawing a bear with a cone on his head as a way to make sense of how a person close to him was suffering from mental illness. The resulting book is both an emotional gut punch and a warm embrace, recognizable immediately to anyone who has ever suffered or loved someone who has suffered in similar dark places. In other words, all of us.

Available for pre-order. This item will be available on February 21, 2023.

“An excellent example of silent narrative conveying feelings of entrapment and resistance, feelings that are not easily described – or even understood – but still necessary to witness, to resolve.”

“What better way to convey the feeling of the wordless country of depression and the adjacent state where the beloveds of the sufferers suffer alongside than through spectral prints and drawings that manage to be both terrifying and delightful? With Bear, Staffan Gnosspelius has captured the abyss—tentacled, thorned, rife with traps, drained of color, light, and language—and the respite and grace offered by love. This is a deeply tender and wondrous book.”

– Maud Casey, author of The Art of Mystery: The Search for Questions and The City of Incurable Women

“A bear with a cone stuck on his head struggles to free himself in a number of ways, but nothing works. A hare tries to help without success; he is heaped with the bear’s invectives and venom. The bear wanders off, encountering a monster and a bear trap, while the hare waits nearby, ever patient, forgiving, and encouraging. When the bear does free himself, it presents a new challenge as the nature of the animals’ relationship changes. In frustration and desperation, the bear puts the cone back on, but as his former problems re-emerge, the hare helps him to remove the cone once and for all. The book is a powerful visual metaphor for depression and its effects. The cone’s origin is not revealed, but this only makes the message more universal and relatable as the bear struggles to bear the burden of his affliction. The book ends with the two animals seated together in peace, the cone resting between them, a representation of the ongoing weight of mental illness on their friendship. The book’s artwork is gorgeous and emotive, with incredible detail in some panels and simple sketches in others, so that weight and complexity are manipulated for maximum impact. Though most of the book is black and white, the rare use of color is representative, and the final illustration uses it to hint at a more promising future. Bear is an outstanding graphic story — an example of the power of images to communicate complicated feelings.”

STAFFAN GNOSSPELIUS was born in Sweden and studied visual communications at Edinburgh College of Art and at Chelsea College of Art and Design in the U.K. Since 2002 he has lived in London where he is a printmaker, illustrator, and artist. Staffan is the author of the children’s book, Julia and the Triple C, which will also debut in the Fall of 2022.

Other books by Staffan Gnosspelius 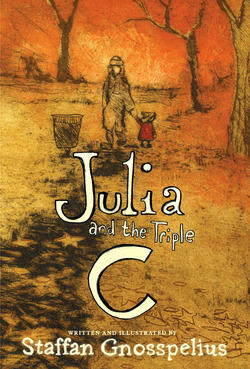 Julia and the Triple C