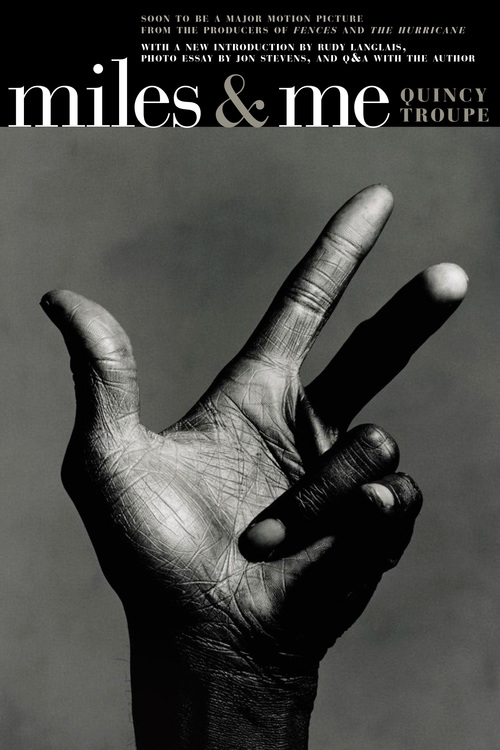 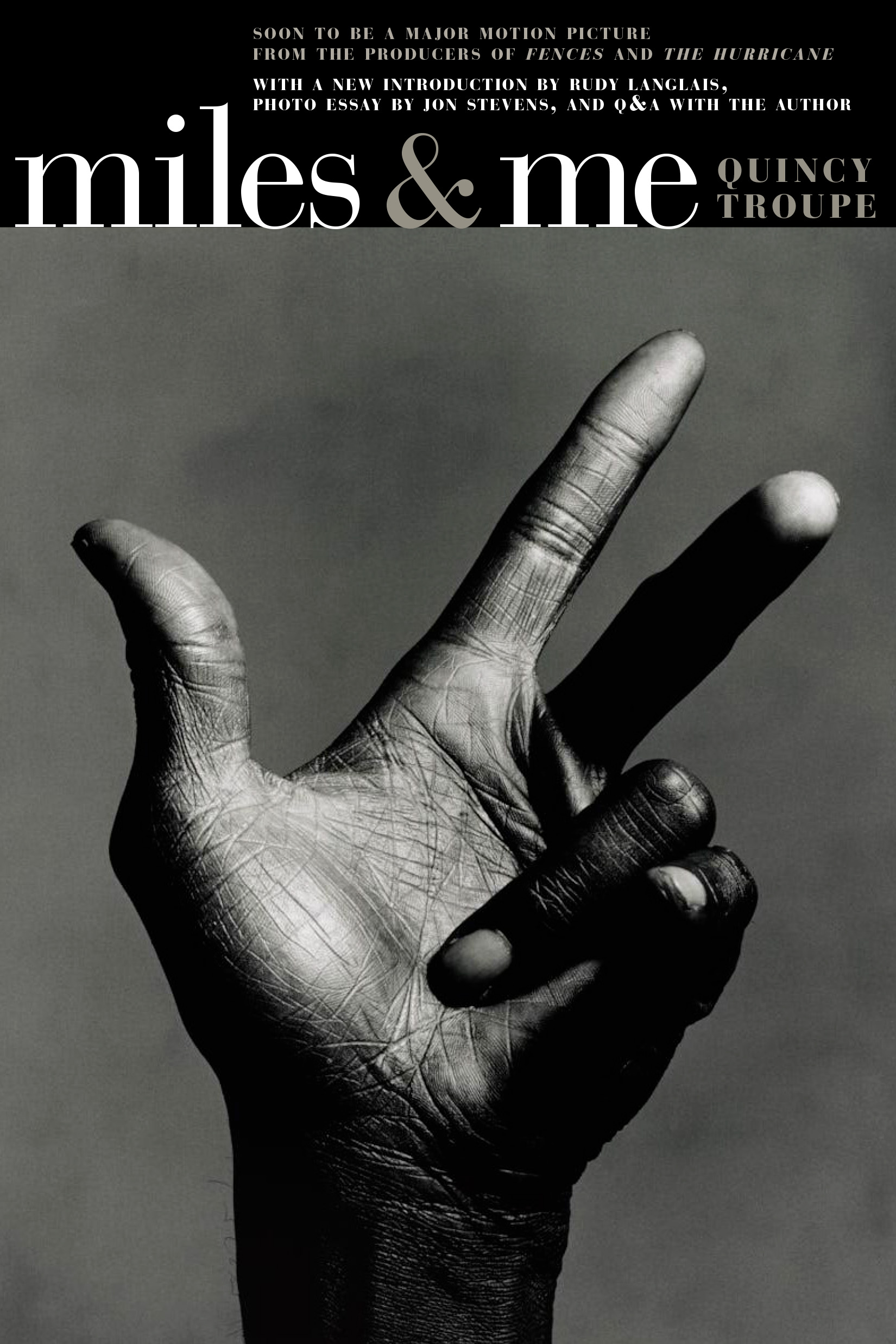 Poet, activist and journalist Quincy Troupe's candid account of his friendship with Miles Davis is a revealing portrait of a great musician and an engrossing chronicle of the author's own artistic and personal growth. Miles and Me describes in intimate detail the sometimes harrowing processes of Davis's spectacular creativity and the joys and travails Davis's passionate and contradictory temperament posed to the two men's friendship. Miles and Me shows how Miles Davis, both as an artist and as a black man, influenced Troupe and whole generations of Americans while forever changing the face of jazz.

In 1985, Spin magazine hired Troupe to do an exclusive two-part interview with the by-then legendary jazz artist Davis. The hour-and-a-half scheduled interview stretched to ten hours. After it was published, Davis was so enamored of Troupe and the interview that he finally relented to a major publisher's request that he write his autobiography under the condition that they could get Quincy Troupe to write it. Miles: The Autobiography became an instant bestseller and opened up the entire field of popular music autobiography. Years later, Quincy went back to his notes of his time with Miles that had been so important to them both, and produced this more intimate book, Miles and Me, told from his side of their friendship.

Miles and Me takes us from St. Louis, where both men grew up, to New York, where both men lived, to Malibu where Miles also kept a home. Troupe also takes us through the entire catalogue of Davis's recordings. Troupe calls his friend "irascible, contemptuous, brutally honest, ill-tempered when things didn't go his way, complex, fair-minded, humble, kind, and a son-of-a-bitch." The author's love and appreciation infuses Miles and Me with a rare quality of grace, and at the same time, throughout the book, Troupe's observations of his friend are keen, sometimes hilariously funny, and truthful, as he knows Miles would want him to be.

Black History; Black LiberationActivist Stories, Biographies, and Memoirs of ConscienceLearning from the Past for a Better Tomorrow

“Brilliant, poetic, provocative, Quincy Troupe's Miles and Me reveals the man behind the dark glasses and legend.”

“Using refreshingly unscholarly language, poet and literature professor Troupe paints an aptly minimalist portrait of the artist as a man-child in both his musical curiosity and his irrational tantrums. Miles and Me is witheringly honest and deeply perceptive. A must-read for Davis devotees.”

“[Troupe] gives the stories behind the collaboration, from his own introduction to Davis's music in the 1950s—and to Davis's stature as 'an unreconstructed black man'—up to Davis's death in 1991. . . .”

“Troupe is a wonderfully astute judge of human behavior and brings a poet's acuteness of vision to depicting Davis's aura of intimidation and kingly power. He is also well aware of Davis's deeply felt loneliness, the terrible solitude of genius.”

“It has been said that Miles Davis was a great poet on his instrument. In a similar vein, it can be said that Quincy Troupe is a great instrument in his poetic delivery. As fate would have it, these two very talented individuals would form a mutual and intriguing bond. Miles and Me, Quincy Troupe's latest book, is a honest, serious and sometimes hilarious memoir of his warm and cherished friendship with Miles Davis.”

To celebrate the publication of Duende: Poems 1966-Now, the collected poetry of Quincy Troupe, we're proud to share two poems from the new collection: "A Dirge for Michael Brown, Tamir Rice & Trayvon Martin," originally published in Seduction: New Poems 2013–2018, and "Eye Am Thinking of Moments," originally published in his 2006 collection titled Architecture of Lanugage.

where does life-force of breath go after flesh falls away from bone,
does it rest in the womb of memory, raise up its spirit inside
ghost voices recognized once as bodies carrying names of michael,
tamir, trayvon, so many other young black boys & girls with bright eyes, looking
into a future of dreams before being cut down by spitting lead,
fired into their spirits carrying their names in ferguson, cleveland,
chicago, florida, where do their spirits go after breath leaves them
suddenly beyond hearing love from their mother’s & father’s voices,
brothers & sisters too quaking grief, close friends

do they hear music now, a trumpet lick sweet as a sad kiss,
wailing over piano keys tickling lyrical disbelief, rain falling
on days when mallet drum beats echo footsteps soft as memory
when a trumpet voice hauntingly pierces flights of mourning’s
gloomy light, bird wings slicing through sadness of the day,
bass strings echoing echos, beneath dark aching words of a poet’s voice raising up
names of so many robbed of futures by spitting bullets stamped with their names,
spitting bullets
shrieking like hornets, stamped with their names,

where will all this death take us beyond tears, weeping music, poetry
moaning words of a st. louie woman, how long will memory remember this fear,
these lost names stamped on faces of paper posters
nailed to trees, walls in soiled rooms splattered with blood
inside mourning houses for years carrying memories of young black faces with
sweet smiles, eyes bright as suns staring into a future
once possible with dreams, lost in an instant after death
fired from demons walking still amongst us now enter their brains,
how long will we keep these spirits warm with love inside our hearts, before
amnesia’s modern embrace obliterates time entombing
so many celebrated as martyrs now, yes, black lives do matter,
have always mattered here & now, each & every day,
every second, minute, every hour, yes, black lives do matter, alive

have always mattered, breathing, magical, beautiful, alive,
living does matter for those who know meaning lives here
when lungs take in breath, makes us whole, creative, does matter
when air is sweet beneath the sun, wondrous, magical as music, poetry,
yes, black lives do matter, all life matters every day light rises
with the sun, when we welcome the moon, shadows
wavering like wind-breath singing through leaves of trees swelling
with symphonies, voices, beautiful, powerful as choruses of blues tonguing
insinuation aching with puns, humor drawn
from black lives, inside songs, yes, black lives do matter
each day the sun blooms a trumpet voice within the coal skin of night,
where the moon shines in the eyes & mouth of a black child smiling
every moment in a trumpet voice piercing as the sun & moon
rising , breathing inside lungs inhaling, exhaling, the miracle

EYE AM THINKING OF MOMENTS

eye am thinking of moments when my thoughts run
free as twisting wild vines growing under the sun,
soft rain gathering new puddles around roots,
dew drops of crystal on flower petals, mist swelling
in the air, the sound of language percolating everywhere
music, the hum of creation improvising rhythms,
mysterious as soukougnans shedding human skin,
throwing off light, magic comes when you least expect it,
is a lewoz of drums, pippiree birds serenading, colibri eating
bananas, gwo kas speaking in seven-rhythms, time, bonda-butts
responding to deep ancestral memories, a dirge
becomes a kite, is a beautiful sight up there flying
free until a strong wind comes, breaks it apart,

like syllables of poems gone wrong, surfers on waves,
the mind miscalculates the power of rhythm,
the deep notion all things have, memories of their own magic,
to change directions, as when volcanoes explode, floods
take back space where fingers of its rivers once ran,
where water first came from, is as mysterious
as why tornadoes, hurricanes swirl across time, space, creating
conditions for their own destructive artistry, heard in the syllables
their winds bring, is a certain clarity inside their own savage beauty,
an indelible music in the ferocious howling gusts of rhythms
screaming frightening secrets throughout their lifetimes,
everywhere either of them passes dreams of men flung
stunned into the air, where they fly like beats of drums,

what do we know of ancient secrets, magic, pippiree birds
singing in the sweet, gathering sounds of evening,
bwa-kabritt crickets, large as small boulders screeching loud
as some scary, imagined zombies flying through the night
to bring us ancient cries predicting rain, sounding mating calls,
they land high up in leafy branches of trees, rooftops,
surrounded by darkness, what do we know, those of us blah-blah,
in violent, industrial cities, living on the run, zooming around
like bats out of hell, or crawling around our steel-encased homes
gridlocked on freeways like shoppers on a sale day at the mall,
or underground in subways smelling of pee, oil, & metal
what do we know of mofwazés, soukougnans shedding skin,
throwing off light, pippiree birds singing sweet love
songs of gwo-ka drums gathering lewoz rhythms,

magic can come when you least expect it, from anywhere,
mysterious as the sources of hurricanes, tornadoes, language
in the air percolates everywhere, music, like mist, suddenly there,
swelling here, blooming fresh as new flowers after soft rain drums
bonda-butts in to the air responding to ancestral memories

From Architecture of Language (2006) 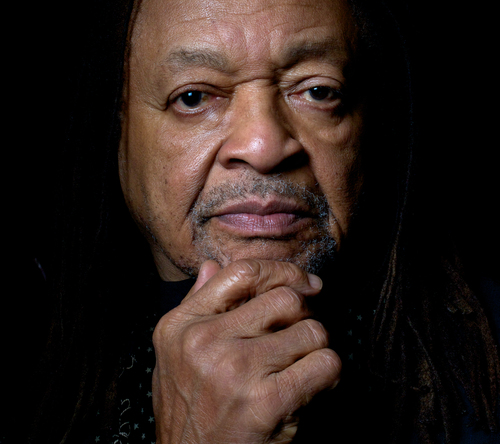 Poet, teacher, journalist Quincy Troupe is an alumnus of the Watts Writers Workshop and, along with his friends Ishmael Reed, Amiri Baraka, Nikki Giovanni and others, associated with the Black Arts Movement. He was named California's first poet laureate in 2002. Troupe's Miles: The Autobiography is considered a contemporary classic of musical artist biography. Among his many other books are his collaboration on the autobiography of Chris Gardner, The Pursuit of Happyness, which became a popular film starring Will Smith. He also wrote James Baldwin: The Legacy and Earl the Pearl: My Story by Earl Monroe and Quincy Troupe. Troupe has published many volumes of his poetry over the years and has also published several children's books.

Other books by Quincy Troupe 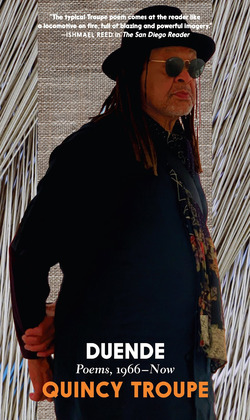