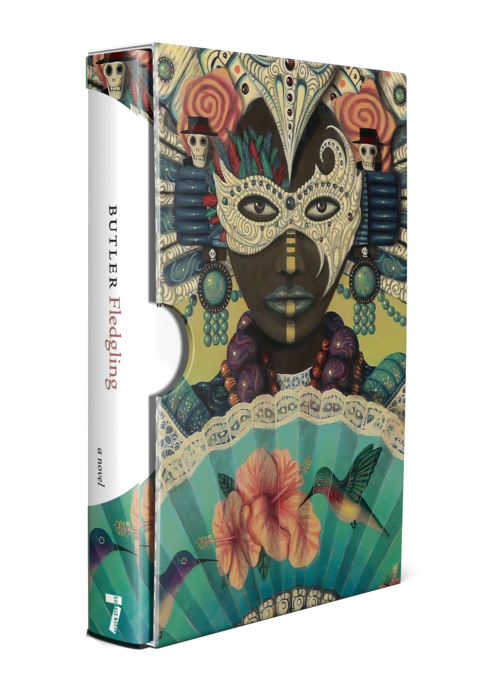 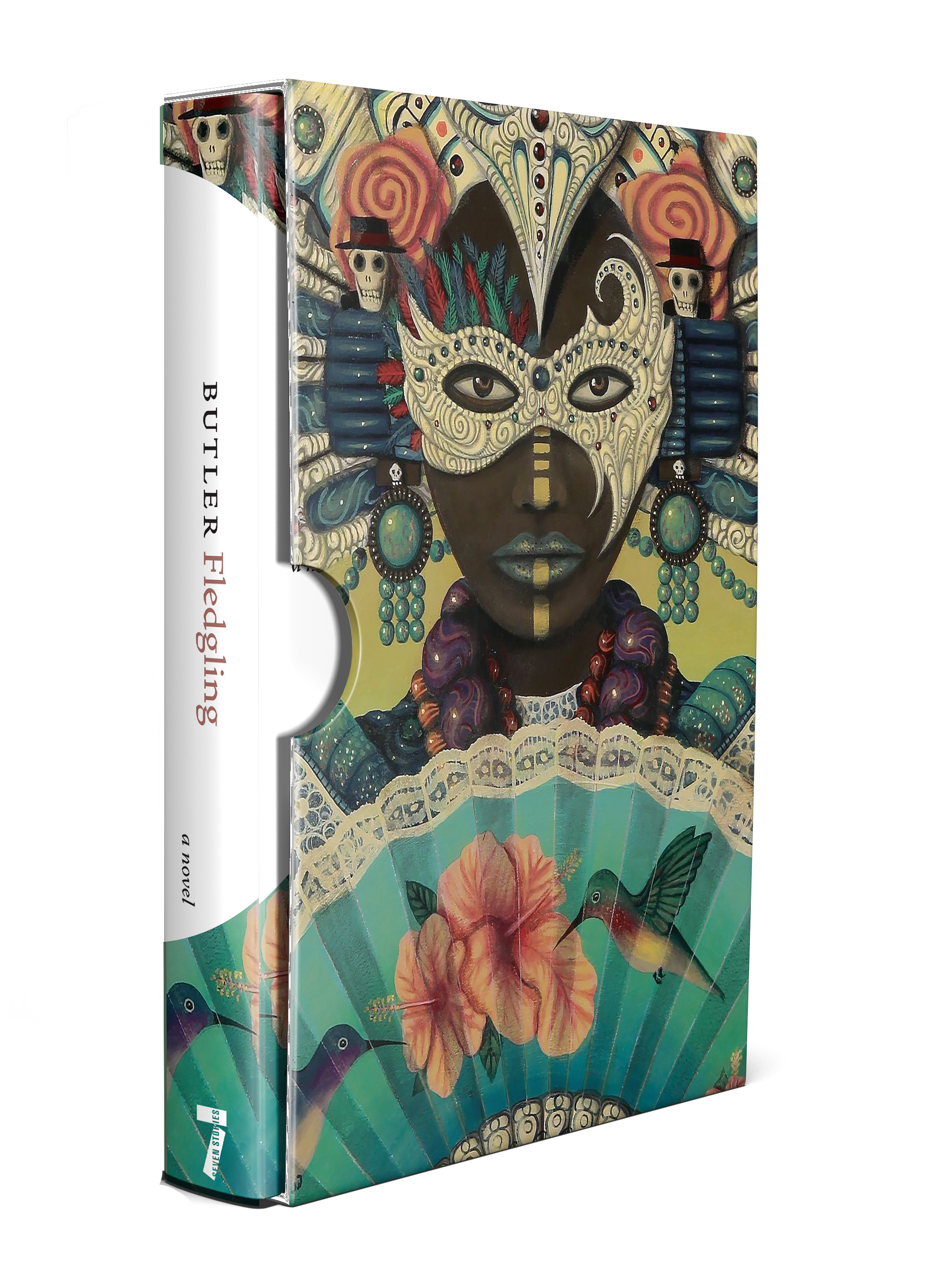 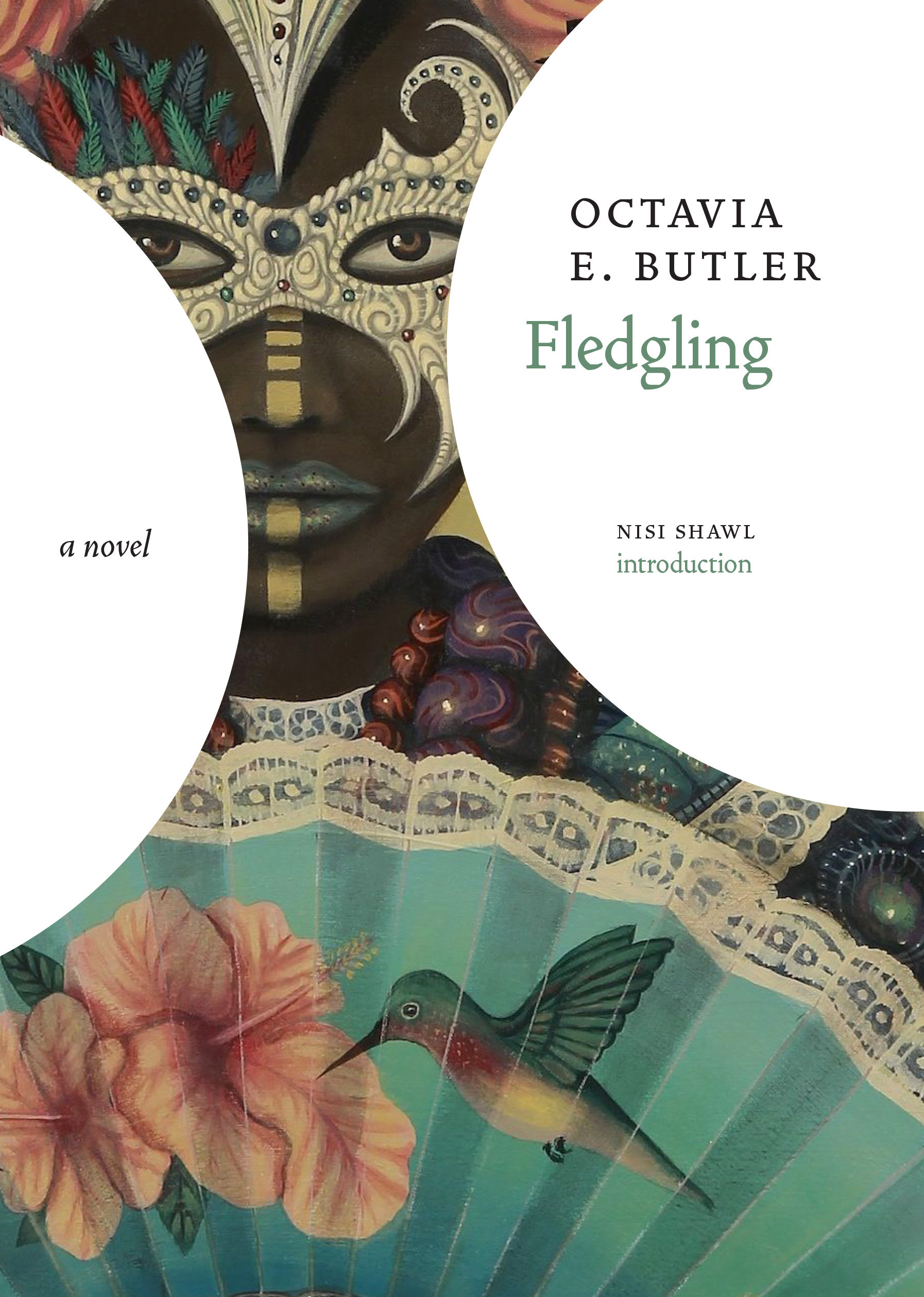 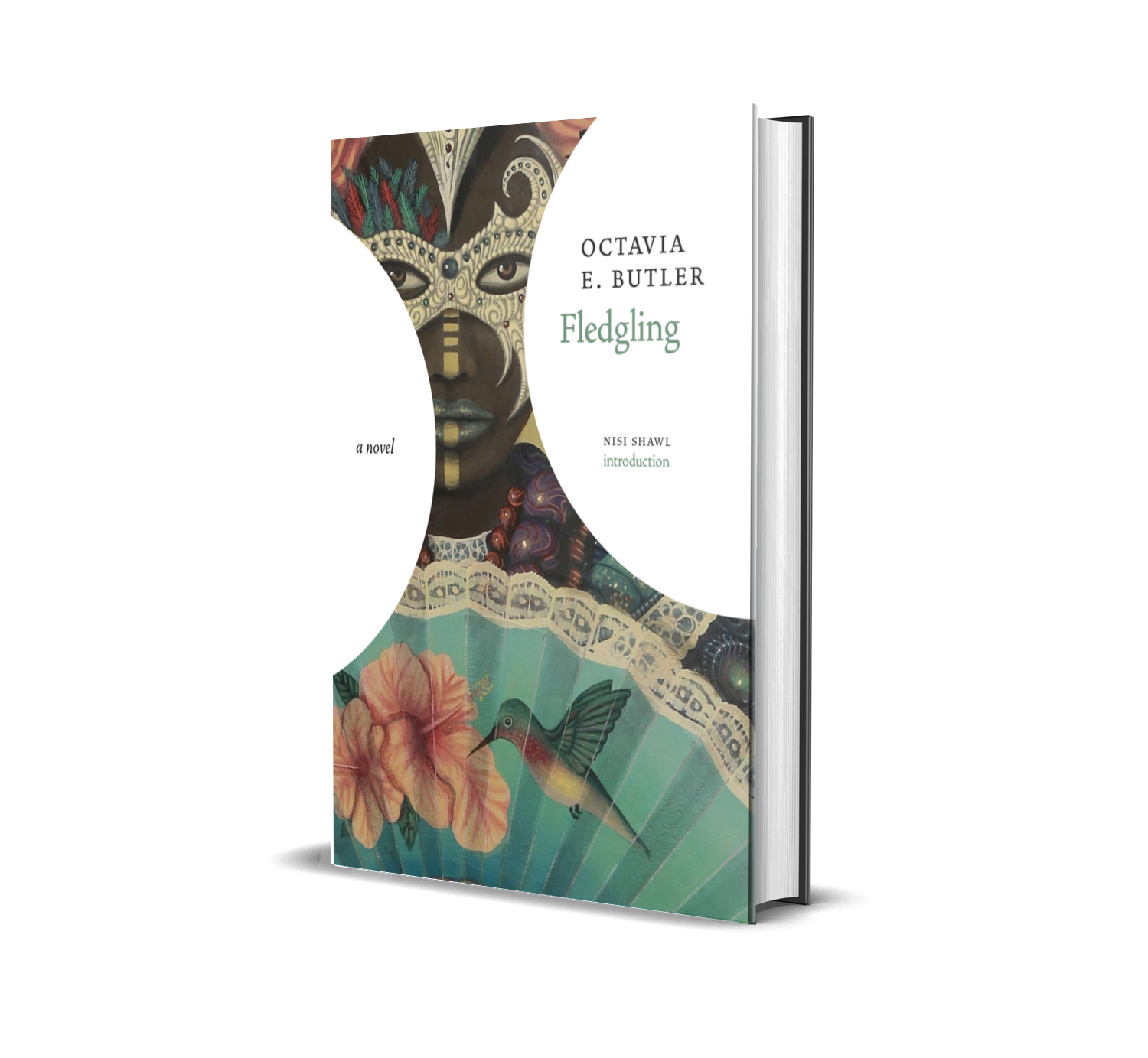 Fledgling, Octavia Butler’s last novel, is the story of an apparently young, amnesiac girl whose alarmingly un-human needs and abilities lead her to a startling conclusion: she is in fact a genetically modified, 53-year-old vampire. Forced to discover what she can about her stolen former life, she must at the same time learn who wanted—and still wants—to destroy her and those she cares for, and how she can save herself. Fledgling is a captivating novel that tests the limits of "otherness" and questions what it means to be truly human.

“The much-lauded Butler creates vampires in her 12th novel (her first in seven years) that have about as much to do with Bram Stoker's Dracula as HBO's Deadwood does with High Noon. They need human blood to survive, but they don't kill unless they have to, and (given several hundred years) they'll eventually die peacefully of old age. They are Ina, and they've coexisted with humans for millennia, imparting robust health and narcotic bliss with every bite to their devoted human blood donors, aka "symbionts." Shori is a 53-year-old Ina (a juvenile) who wakes up in a cave, amnesiac and seriously wounded. As is later revealed, her family and their symbionts were murdered because they genetically engineered a generation of part-Ina, part-human children. Shori was their most successful experiment: she can stay conscious during daylight hours, and her black skin helps protect her from the sun. The lone survivor, Shori must rely on a few friendly (and tasty) people to help her warn other Ina families and rediscover herself. Butler, keeping tension high, reveals the mysteries of the Ina universe bit by tantalizing bit. Just as the Ina's collective honor and dignity starts to get a little dull, a gang of bigoted, black sheep Ina rolls into town for a species-wide confab-cum-smackdown. In the feisty Shori, Butler has created a new vampire paradigm—one that's more prone to sci-fi social commentary than gothic romance—and given a tired genre a much-needed shot in the arm.”

“Renowned sf author Butler's first novel since Parable of the Talents (1998) delves deeply into the world of vampires… Butler has a reputation as a master for good reason, and her narrative flows quickly and seamlessly along as Shori seeks those who would destroy her. Gripping and memorable, Butler's latest is a welcome return performance.”

“Like most of Butler's protagonists, Shori is black — the melanin in her skin is what allows her to withstand daylight. And, as in Butler's other novels, the characters deal with questions about racism and the viciousness it brings out in American society. But in Fledgling, racism isn't simply a black-and-white issue... Butler goes on to explore ideas of community, justice, and race with a nod to the preternatural. Her writing is vivid and tense, and she manages to make even a drawn-out Ina judicial council seem complex and intriguing. The book is laced with emotionally and erotically charged encounters, some of which are disturbing, even after one remembers that Shori isn't actually a child... Butler also challenges conventional ideas about relationships and responsibility, and introduces new ones about morality and justice. It's a fascinating read, uncomfortable, horrifying, and ugly at times, but always compelling.”

“Octavia Butler's deeply disturbing novel, Fledgling, about a 10-year-old girl vampire's struggle to survive is my book of the year. A harrowing meditation on dominance, sex, addiction, miscegenation and race that completely devours the genre which gave rise to it. How can you go wrong with a novel about a black vampire that has the line: 'Do you love me, Shori, or do I just taste good?'”

“A little girl suffering from amnesia wakes to find that she’s actually a middle-aged vampire, in this suspenseful novel from Butler, her first in seven years… Butler effortlessly navigates what are pretty queasy waters, what with Shori’s frank and carnal relationship with her symbionts, complicated by her looking like a ten-year-old girl when in fact she’s 53. Racist fears of miscegenation are also given an interesting spin in a story so convincingly told, via Butler’s hardboiled yet emotional prose, that one is likely to forget it’s about vampires… A finely crafted character study, a parable about race and an exciting family saga. Exquisitely moving fiction.”

“The often bleak speculative fiction of Octavia E. Butler might seem an odd escape from the news, but I found most of the vampires in Butler’s final novel, Fledgling, somehow reassuring. Butler’s vampires aren’t the average bloodsuckers, snacking on humans and discarding our desiccated corpses like peanut shells, but symbionts who cultivate extended families of willing humans, granting them longer lives and better health… Shori sets out to rediscover who she is, build a new family and bring the murderers to justice, confronting bigotry along the way. Other Butler books, like Kindred or the Parable novels, might feel more topical, but if you’re intrigued by humanistic, hopeful vampire lore, I can’t recommend Fledgling more highly.”

“Beginning with the squicky idea of a vampire-girl with an adult male dependent, Butler’s Ina families pose characteristically unsettling questions. Don’t all intimate relationships—not only those deemed taboo—involve power imbalances? And what can 'consent' mean when one being needs another to sustain one’s life? After one bite, it’s difficult to tell where choice ends and compulsion begins. Butler suggests that the Ina-symbiont relationship might be no worse than the forms of dependency that humans already take for granted.”

“...within a few chapters, we're utterly seduced by the forward motion of the narrative. Bitten, is how the narrator herself might put it... Dare I say that Butler's emotionally and intellectually engaging story about a war between vampire clans carries the reader along with that same sense of being in good hands? I only wish she herself had been longer lived.”

“The much-lauded Butler creates vampires in her 12th novel (her first in seven years) that have about as much to do with Bram Stoker's Dracula as HBO's Deadwood does with High Noon… Butler, keeping tension high, reveals the mysteries of the Ina universe bit by tantalizing bit… In the feisty Shori, Butler has created a new vampire paradigm—one that's more prone to sci-fi social commentary than gothic romance—and given a tired genre a much-needed shot in the arm.”

“How strange to find Octavia E. Butler digging up the old bones of this legend. As the first African American woman to make a name for herself in science fiction and the winner of a MacArthur genius grant, she seems an unlikely victim of Dracula's allure. But, as we might expect, her new novel, Fledgling , doesn't just resurrect the pale trappings of vampire lore, it completely transforms them in a startlingly original story about race, family and free will... There's not a drop of Bela Lugosi in these pages, but Fledgling exercises the same hypnotic power the old Count projected onto his victims. Squirming in my chair, I was totally hooked, sometimes nauseated, anxious to put it down, but unable to look away. Go back, go back!... How many of our happy relationships involve a degree of dominance or dependence that we can't acknowledge? This is Butler's typically insidious method: to create an alternative social world that seems, at first, alien and then to force us to consider the nature of our own lives with a new, anxious eye. It's a pain in the neck, but impossible to resist.”

“Fledgling, the last novel Butler published before her death in 2006, is a propulsive story about Shori, an amnesiac 53-year-old Black vampire who must reconstruct her past after she wakes up shrouded in darkness, alone and with no memories. While Shori makes her way through the world—specifically the suburbs of Washington State and, later, California—she discovers more about herself and her apparent incongruities: As an Ina (a vampire species that lives relatively harmoniously alongside humans), she looks like a 10-year-old child, but she has the desires of a woman; she needs human blood to survive, but feeding off humans can make them, in turn, physically stronger. Fledgling is, at heart, about an individual reconciling who she is with how she looks, and learning to use her considerable power responsibly.”

MacArthur Genius Winner, Grande Dame of Science Fiction, and founding author of Seven Stories Press, Octavia E. Butler was born on June 22, 1947. She would have been 74 today. We miss her every day, and we’re incredibly grateful for the work and legacy she has left behind.

•  Read a story from Bloodchild

•  Read an excerpt from Parable of the Sower

•  Watch a lost interview between Julie Dash and Octavia Butler

•  Watch her interview at Balticon

•  Watch this clip from the documentary Black Sci-Fi

Fledgling, Octavia Butler’s last novel, is the story of an apparently young, amnesiac girl whose alarmingly un-human needs and abilities lead her to a startling conclusion: she is in fact a genetically modified, 53-year-old vampire. Forced to discover what she can about her stolen former life, she must at the same time learn who wanted—and still wants—to destroy her and those she cares for, and how she can save herself. Fledgling is a captivating novel that tests the limits of "otherness" and questions what it means to be truly human.

A perfect introduction for new readers and a must-have for avid fans, this New York Times Notable Book includes "Bloodchild," winner of both the Hugo and the Nebula awards and "Speech Sounds," winner of the Hugo Award. Appearing in print for the first time, "Amnesty" is a story of a woman aptly named Noah who works to negotiate the tense and co-dependent relationship between humans and a species of invaders. Also new to this collection is "The Book of Martha" which asks: What would you do if God granted you the ability—and responsibility—to save humanity from itself?

Like all of Octavia Butler's best writing, these works of the imagination are parables of the contemporary world. She proves constant in her vigil, an unblinking pessimist hoping to be proven wrong, and one of contemporary literature's strongest voices.

A writer who imagined the dark future we have chosen for ourselves in book after book, OCTAVIA E. BUTLER  (1947–2006) is recognized as among the bravest and smartest of late twentieth century fiction writers. Her work includes Parable of the Sower, Parable of the Talents, Fledgling, and the short story collection Bloodchild. A 1995 MacArthur Genius Award winner, Butler transcended the science fiction category even as she was awarded that community’s top prizes, including the Nebula and Hugo Awards. Not merely a prophet of dystopia, Butler also wrote of the ways human beings might subvert their dismal destiny. “I write about people who do extraordinary things,” Butler has said, “it just turns out that it was called science fiction.” Her novels and stories have reached readers of all ages, all races, and all religious and sexual persuasions. For years the only prominent African-American woman writing science fiction, Butler has encouraged many others to follow in her path. The Octavia E. Butler Scholarship was established in her memory in 2006, providing scholarships for young people of color to attend the Clarion Writers’ Workshop, where Butler herself began writing science fiction.